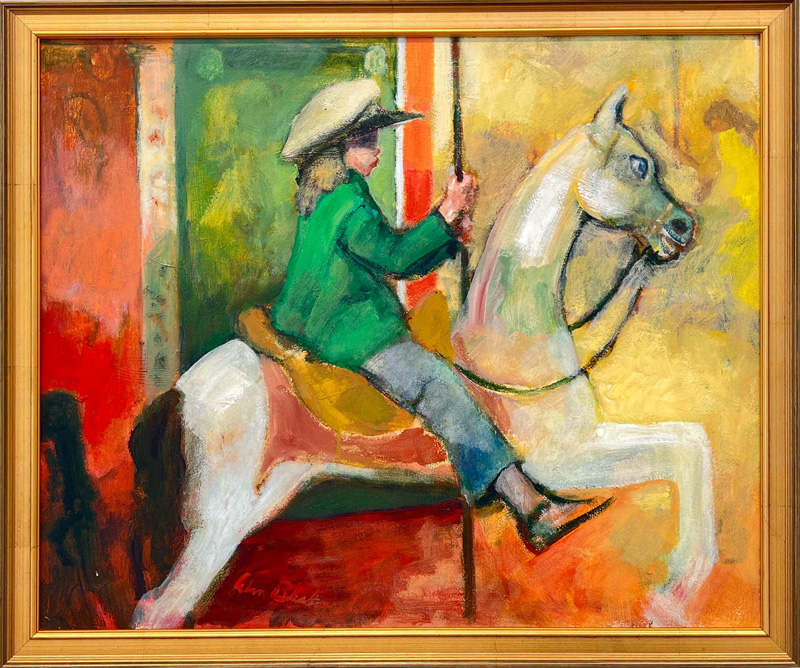 William Blakesley’s art is the epitome of Martha’s Vineyard, expressing the unique and intangible quality of the island and island life. The scenes are immediately familiar, conveying the tenor of the vineyard through different seasons and locations. The collaborative exhibitions at the Featherstone Center for the Arts and Martha’s Vineyard Museum provide an opportunity to see the breadth of his work across the decades from 1956 to 2012, honoring what would be the artist’s 101st birthday.

Variety is the name of the game for Blakesley’s art in terms of subject matter and media. While there are plenty of beach scenes, you’ll also see iconic images of the campground’s gingerbread cottages, Oak Bluffs Bandstand, crowds of day trippers past the Queen of the Island , people picking berries, children enjoying flying horses or letting off steam in the autumn leaves, scallops at work, fishermen on the Menemsha pier and sleds bundled up in the snow. There are close-up portraits that vary from studio nudes to performers from when the circus came here in the summer of 1964. There are also great pieces of birds on a white background and others treasures to discover.

Blakesley’s style is both abstract and simultaneously realistic. His fast, minimalist strokes convey the essence of each person or scene. He wrote of his art: “When I draw a subject I hope to become one with it – a child, a landscape, an animal – I like to be part of the good stuff. Excitement is d “trying to get even closer; discouragement is falling so far short. Incentive comes from the illusion of improvement; that the next experience will reach the goal. The rewards are too many to mention, but financial and honorifics are not on the list.

Blakesley’s style over the decades evolved somewhat backwards from that of many artists, beginning with an abstract bent and evolving into a tighter realism. Barbara, Blakesley’s daughter, whose collection makes up the shows, says: “He had the ability to capture a person in just a few lines. I’ve seen him do it many times, catching people at whatever they were doing or thinking at the time. He was very quick.

Perhaps one of the reasons for the wide variety of scenes in the vineyard is that he always traveled with his sketchbook. His daughter recalls: “He took it everywhere we went – ​​restaurants, concerts, on the street, on the beach. He seemed to constantly need to draw. I remember being pissed off as a kid at a concert and you could hear his felt scratching when I tried to listen to a piece of classical music.

The exhibits also reflect Blakesley’s ability to work in a variety of mediums, drawing in pen and painting in watercolour, acrylic or tempera. He also created superb serigraphs, a printing technique in which the image is made directly on screen and then printed. Blakesley rarely used oil paints because he worked quickly and disliked the time they took to dry. His powerful use of color unites art, regardless of medium or image. Blakesley’s palette animates each piece so that both exposures are a visual bonus.

Born in 1921, Blakesley grew up in Columbus, Ohio. He started his habit of drawing or painting daily at a young age, after being encouraged by his first grade teacher to pursue his talent. Blakesley served in World War II and later taught art, including at Florida State University and Muskingum College. Blakesley landed on the vineyard in 1955. Initially he and his first wife worked as stay-at-home parents at West Tisbury Youth Hostel before building their home in 1958. Later the Blakesleys taught art in elementary schools on the island. He opened a gallery on Circuit Avenue in Oak Bluffs, ran it for many years, then moved to Montgomery Square in the campground after retiring and moving to the island full-time.

Blakesley believed that everyone should be able to afford art. Barbara says, “When he had his studio near the campground, he had a sign that said, ‘By appointment or by chance’, and people could just come in and buy pieces while he was making them. He wanted to document the Vineyard and its inhabitants and the times. He tried to keep his prices very low and to make the job accessible to everyone.

“I want old friends, people who knew him, as well as newcomers to the vineyard, to have the chance to see how the island has changed over these 50 to 60 years, as well as how his style changed.”

Blakesley wrote, “If my work has any purpose, it’s the eternal of trying to maintain a positive attitude in a seemingly indifferent world – the struggle is everything. Despair, despair, etc. seem obvious or too easy. The negative does not exist as art.

And his art speaks to the joy and beauty of daily life on the island.

It may be trendy, but who owns the AI-generated illustrations?