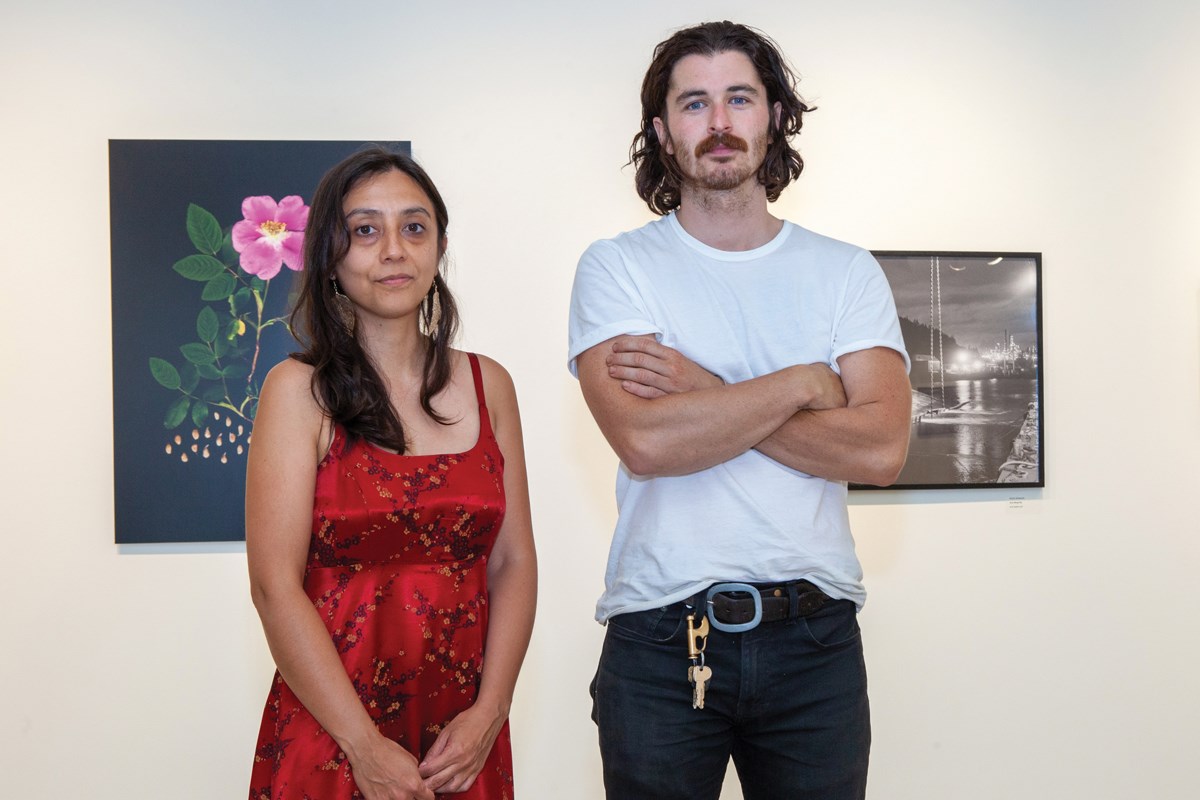 Photography that showcases the fluidity of nature – at radically different scales – is at the center of the latest exhibition at Gibsons Public Art Gallery, which opens July 28.

Artists Reave Dennison and Laara Cerman visited the gallery on July 30 to present their respective exhibitions at a public reception.

Dennison is a photographer whose series of black and white silver prints make up Under 60 Tons. Dennison grew up in Gibsons and graduated from Elphinstone High School. He now combines his photography with journeyman work on the type of work vessels featured in his images.

Dennison’s images are taken from a sailor’s perspective and developed by hand in his Mayne Island studio. He avoids calm harbors in favor of rough seas, rusty bulkheads and rain-streaked glass. In Barge Swap he captures the industrial intimacy of a tug tied to its load, the beams of sailors’ headlights blazing in the twilight. Muscular cables embrace a bird’s nest with five unhatched eggs in Bowline. A weary skipper presses his fingers to his temple in the ominously titled Jonas.

“I think I’ve always been drawn to this tough, gritty kind of lifestyle,” Dennison said. “There is a certain mystique that I felt needed to be exhibited in this particular project. [Barging and towage] goes on constantly throughout the year, and people don’t really see it. It takes a lot to make people who work there have a bad day. Everything is relative on the West Coast.

Dennison is sometimes distracted from prospective photography by the need to fulfill his nautical responsibilities. Reminiscing about stormy days at sea, he said: “There are a lot of things lost because I have to put work first. And I saw a lot of things that you couldn’t photograph because they were too intense.

Having developed a technique for lighting sets with flashlights and long exposures, Dennison is now experimenting with underwater photography. “The sea is so real,” he said. “There are little things here and there that humans contribute, but it’s still fair.”

The tenacity of nature is also the subject of Laara Cerman’s botanical studies in the Codex Pacificus. After working with a photographer who assembled large-scale composite portraits, she applied the same principle to creating high-resolution plant images. “Since 2016 I’ve been scanning specimens,” she said, “and it’s a really good excuse to just travel and see what’s growing.”

Cerman, originally from New Westminster, studied at the Vancouver College of Art and Design and Langara College. His chromogenic prints depict vividly hued specimens like red osier dogwood and salmonberry in stark contrast against black backgrounds. Each plant may require up to three scans before being combined with other features like flowers and pods. “I think I’m aiming for around 60% beauty and 40% accuracy,” she said.

Cerman’s subjects include introduced species like creeping buttercup and brown knapweed. “Invasive plants aren’t going to go away,” she said, “but I think we just have to learn how to manage them and make room for native plants. Kind of like people: you have people invasive, and we still have to accommodate them somehow.

A three-dimensional installation titled Flora’s Song sprouted from Cerman’s conversation with geneticist Dr Scott Pownall in 2019. The two devised a mechanism to transpose the nucleotide sequence of DNA in plant species into musical notes. Cerman designed a hand-cranked music box that plays the melody.

“I was hoping it was some kind of melody,” she said. “And I think at first when you play it it sounds very random, but the more you play it you start to hear sections that have an audible pattern.”

Under Six Tons and Codex Pacificus remain on display at the Gibsons Public Art Gallery until August 21.