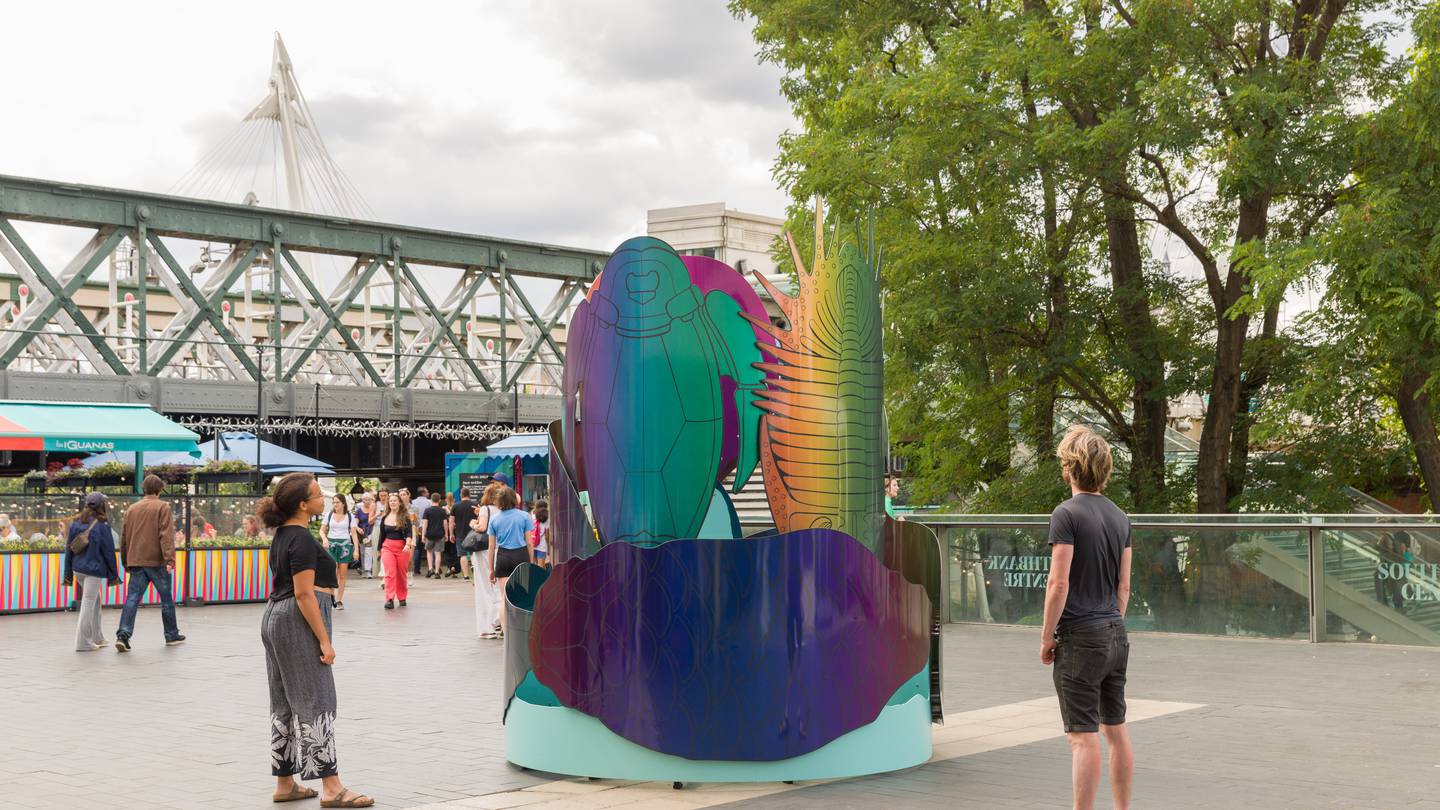 Kuwaiti artist Monira Al Qadiri recently unveiled her sculpture Devonian at the Southbank Centre’s Riverside Terrace, one of the most prestigious plots of artistic real estate in London.

A shimmering, multicolored, fossil-like structure, the piece is based on the bodies of ancient sea creatures to evoke the process by which fossil fuels are made, from the decomposed remains of ancient organisms and plankton found at the bottom. oceans.

“Being able to exhibit my work at the Southbank Center is such a big milestone for my artistic journey so far,” says Al Qadiri. “I hope that the public who come to see my work will find the subject I highlight crucial for reflection and consideration during these changing times in which we live.

The project is the result of its partnership with the Bagri Foundation, a UK-registered charity that supports Asian arts and culture. Al Qadiri says she is “honored” to have been selected for the commission.

The non-profit organization forges collaborative partnerships between artists and institutions such as the Hayward Gallery, part of Southbank, the UK’s largest arts centre.

By working on Devonian, Al Qadiri studied the fossils of creatures that lived nearly 400 million years ago on Devon’s Jurassic Coast, a UNESCO World Heritage Site famous for its rocks, fossils and landforms.

“I mainly searched for illustrations of them,” Al Qadiri said. The National. “They had these crazy, sci-fi looking bodies and heads where bones were on top of their heads. They just looked like something out of a cartoon which really drew me to them.

While being playful and visually stimulating, Devonian explores a timely issue: the exploitation of nature – specifically our reliance on fossil fuels.

“I come from Kuwait, a country that is largely dependent on oil revenues,” says Al Qadiri. “I have a kind of existential relationship with oil and its history and its future as well.”

His work addresses our relationship with oil in a surprisingly seductive way that highlights the impact of fossil fuels on the environment.

“I believe that the world must move beyond oil. It’s hard to realize what a fragile fuel source it is,” she says. “I make these works that revolve around viewing it in different ways to highlight what it’s made of, how we use it, and that it’s not sustainable.”

Extinct, alien-like crustaceans are reimagined in Al Qadiri’s work as a series of graphic patterns on eight separate aluminum panels, connected by a turquoise structure. The forms and scale of the work lend themselves to a public space, which was a source of much consideration when Al Qadiri was conceptualizing the sculpture.

“Public art is a very specific and difficult thing to do, and it’s very different from showing art in a gallery or in a museum,” she says.

“I had to really think about how the public would see it and interact with it. Old people, children, people who are not interested in the arts, how do they see this work? What is it? who will interest them in the subject matter of the work?”

Although inspired by a prehistoric aesthetic, Devonian also feels very contemporary, due to its scale and the shimmering hue that changes subtly throughout the day.

The oil-like luster on the surface of the carving is also reminiscent of the luster of pearls. The effect elevates the optical experience of the work. The commonality in the way color reflects on both oil and pearls, two seemingly opposite elements, is a relationship Al Qadiri has been exploring in the Gulf for years.

This use of dazzling color is a stylistic element found in some of Al Qadiri’s other works. his piece Chimera, a five-meter-tall sculpture, part of the Expo 2020 Dubai public art collection, examined the history and future of the Gulf through scale and color palette emblematic of Al Qadiri.

However, this iridescent, dichroic way of representing color is more than just a visual highlight, but a thought-provoking reference to oil and the larger themes at play.

“In this work, I wanted to make the oil color and make it more playful in some way,” says Al Qadiri.

“I highlight when all of these creatures came together and turned into oil basically, through their color and shape and the way they fit together.”

Devonian is available to the public until November 6 at the Riverside Terrace in London.

The dining room which is actually an art gallery hits LES