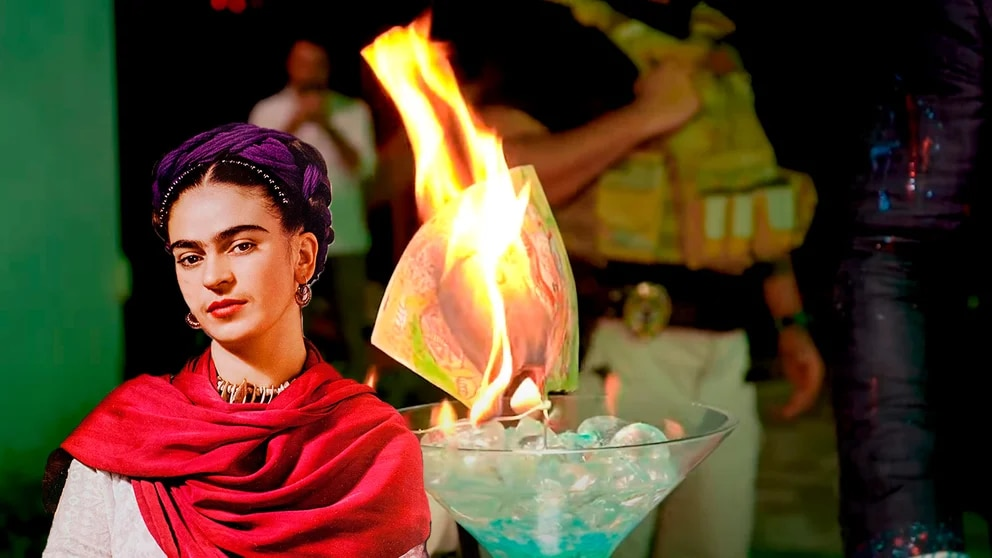 Entrepreneur Martin Mobarak generated great controversy and outrage in the art world internationally. The reason? He set fire to the work Sinister phantasmons by mexican artist Frida Kahlo to turn it into NTF. The piece was estimated at $10 millionon 200 million Mexican pesosand now it’s just a handful of ashes.

The fire took place during a private event at the businessman’s residence, located in Miami, Florida. Mobarak took the Sinister ghosts reaching into a sleeve, removed the frame that protected her and placed her in a glass of dry ice. Immediately afterwards, the flames were lit. As the work burned, to the applause of those present, the song “Cielito Lindo” started playing, performed by live mariachis.

The big party, which included a fashion show and other performances, welcomed art collectors, designers, digital artists and charity representatives. Although it took place on July 30, footage of the event began circulating just days ago, sparking heated controversy.

“Transforming this work into NFT is the way we can immortalize the works and her life, we bridge the gap between traditional art and new art, which is digital art (…) Frida was a person who loved to give This is something that will generate controversy, with this we can ensure the success of this project,” the businessman said in an interview.

Is Frida Kahlo’s drawing worth more in NFT than in physics?

On the Frida.nft site, Martin Mobarak explains that he bought the piece for 10 million dollars in 2015 at the Mary Anne Martin gallery. Sinister Ghosts is a drawing made by Frida Kahlo in 1944 in her diary. On the page, you can find documents such as the certificate of authenticity and the work study, which guarantee its legitimacy.

For his project, he digitized the work front and back in PNG format, to maintain as much fidelity as possible. Subsequently, he converted the file to NFT and generated 10,000 coins of block chain code, each with a unique content record that guarantees its authenticity.

By burning the drawing in public, it was shown that it now only exists in the virtual world. “As the Phoenix rises from its ashes, art rises again into eternity,” Mobarak told Exeleon. Magazine.

After learning that businessman Martin Mobarak had cremated a work valued at $10 million to market it as cryptographic art, Mexico’s National Institute of Fine Arts launched an investigation into “deliberate destruction of ‘an artistic monument’

The National Institute of Fine Arts, Arts and Literature of Mexico said it was investigating and gathering “all the necessary information, in order to establish with certainty” what happened to the work.

Within the Mexican legal framework, there is a decree by which the whole of Kahlo’s work has been declared an artistic monument and, in a statement reproduced by local media, the entity recalled that in Mexico “the deliberate destruction of an artistic monument constitutes a crime in terms of the Federal Law on Archaeological, Artistic and Historic Monuments and Areas”.

However, the businessman chose to defend himself by arguing that thanks to the fact of having burned the drawing, the national heritage will be enriched. According to his estimates, NFTs will be purchased using ETH (Ethreum), a cryptocurrency worth $1,361, and each NFT will be sold for 3 ETH, raising more than around $40 million.

If the accounts were correct, some institutions could benefit from this action, such as the Frida Kahlo House Museum, the Palace of Fine Arts and the National School of Plastic Arts. However, the National Institute of Fine Arts and Literature of Mexico denied the possibility of these public institutions receiving any donation from said collector and recalled that the Bank of Mexico is a trustee of the Diego Rivera and Frida Kahlo Museum Trust, “in its capacity as owner of the patrimonial rights of the works”.

In the same text, the institute dependent on the Mexican government specifies that it “will comply with what is established” under the terms of the Federal Law on Monuments and Archaeological, Artistic and Historical Zones (Lfmzaah), its regulations and the Decree “by whom is declared an artistic monument all the work of the Mexican artist Frida Kahlo Calderón”. This protected set includes the easel work, the graphic work, the engravings and the technical documents owned by the nation or individuals, published in the Official Journal of the Federation of July 18, 1984.

Mobarak purchased the 2015 image from New York’s Mary Anne Martin Gallery. He admits that the engraving of the drawing is a “strong” part and that “it can be misunderstood”, but for him it is a process to lead the artist to an “immortalisation”, “Burning the work will help to create the funds,” said the founder, who believes that if the artist knew the destination of the funds, he would have told him to “burn everything”. Mobarak set fire to the drawing during an event organized on the 30 July in Miami and, from its website, invites the public to buy what it says is the “most historic NFT in existence” in November.

It may be trendy, but who owns the AI-generated illustrations?