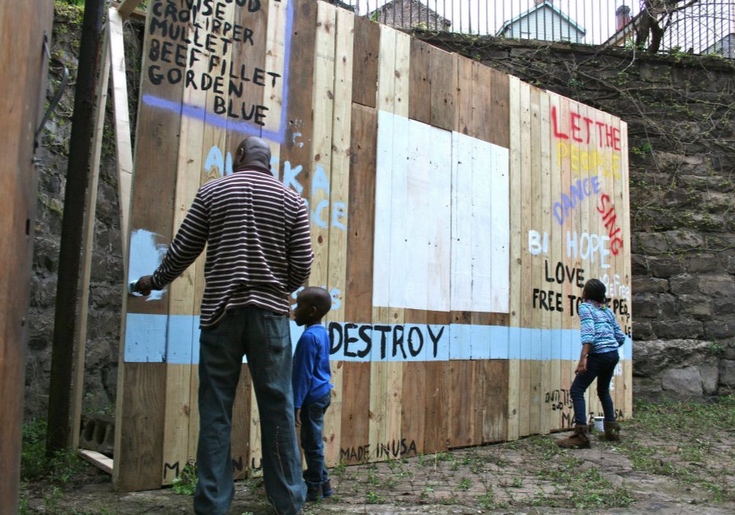 Fetterman says he is a friend of Israel. His art gallery raises questions.

During the election campaign, the lieutenant-governor of Pennsylvania, John Fetterman, boasts of his “unwavering” support for Israel. But the Senate hopeful runs a nonprofit that hosted an anti-Israel art exhibit that demonized Israel as an “apartheid state” and spread slanderous lies about the Jewish state.

Fetterman’s gallery, UnSmoke Systems, hosted a 2012 exhibition titled “I Am Palestine,” featuring a so-called apartheid wall that condemns Israel’s 440-mile barrier separating Israel from the West Bank at the following a wave of Palestinian suicide bombings launched from the territory that left an estimated 700 Israeli civilians dead.

The artists featured in the claimed exhibition in a statement accompanying the plan that Israel built the wall “under the guise of security while stealing more Palestinian land and resources”.

Fetterman’s endorsement of the exhibit calls into question his claim, while campaigning in a purple state, to support “strengthening and improving Israel’s security.” The former mayor also touted support for Peace Action, an anti-war group that has promoted a boycott of Israel and encouraged diplomatic ties with Iran. Fetterman’s opponent, Mehmet Oz, said the endorsement shows Fetterman is “not a friend of Israel.”

Fetterman’s campaign defended the gallery’s exhibit and its views on Israel, telling the Free Washington Beacon that Fetterman “is and has always been a pro-Israel Democrat”.

“He strongly believes that Israel has the right to defend itself and is committed to always addressing and supporting Israel’s security,” Fetterman campaign communications director Joe Calvello said. “John is also proud to have helped transform an abandoned convent into a space that brings art and artists to Braddock, creating economic development.”

The Fetterman Gallery, which is supported by his non-profit organization Braddock Redux, also commissioned a fresco in 2008 titled “Three Boys Living in the Shadow of the Separation Wall” by an artist, Swoon, who is a prominent anti-Israel activist and has called for a cultural boycott of the Jewish state.

One of the artists featured in the 2012 exhibit, Karina Goulordava, was at the time vice president of the Students for Justice in Palestine section at the University of Pittsburgh, a group that “disseminates anti-Israeli propaganda often mixed with incendiary and sometimes combative remarks”. rhetoric,” according to the Anti-Defamation League. The student group often uses apartheid walls at its anti-Israel rallies “portraying Israel as solely responsible for the Israeli-Palestinian conflict”, the ADL says.

Goulordava, who helped organize a “Smash Israel Apartheid” event at the University of Pittsburgh, developed the art exhibit with Palestinian activist Fadi Kattan when they worked at the International Solidarity Initiative, a Palestinian advocacy group. Kattan, a celebrity chef, said he “won’t work with an Israeli chef because we’re still an occupied country.” He said last year “it’s extremely sad to be Israeli because being Israeli means you came to this land because you can prove you’re Jewish.”

Fetterman started UnSmoke Systems in 2008 as a subsidiary of Braddock Redux, a charity he founded with the support of his father, a wealthy insurance executive.

Artists featured in the “I Am Palestine” exhibit invited members of the community, including children, to write messages on the makeshift wall to mimic the graffiti that adorns the West Bank structure. Video interviews Goulordava conducted with Palestinians living in the West Bank were projected on the wall.