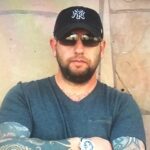 A former soldier opens an art gallery in Hove pledging to donate the money from the sale of his original work to a charity for victims of domestic abuse.

Nathan King, known as “Kingez”, will also provide an art platform which has been donated to the KidsOut charity, which helps women and children fleeing domestic violence.

Mr King, 51, served as an infantryman with the Queen’s Regiment during the first Gulf War – just over 30 years ago – as well as on two tours of Northern Ireland.

Although he was born in Brighton, Mr King moved to New York after leaving the armed forces where he joined his family and the British Ambassador’s protection officer.

It was in New York that her interest in art grew. He was fascinated by street art which made art accessible to those who would probably never consider visiting a gallery.

Back in Brighton, and although he had never painted before, his first work, a painting by Amy Winehouse, sold for £3,500 within three hours after being hung on a gallery wall.

Now he is set to open the Hove Street Art Gallery – on Saturday July 30 – with collections for sale from 10 artists, some of them internationally renowned, and with prices to suit all budgets.

At the gallery in Hove Street, all artwork for sale will be original works, many of which will have the option to purchase limited edition prints.

After hearing about KidsOut, Mr King said he was moved by the charity’s ‘incredible work’ to support women and children in UK shelters after fleeing domestic violence as well as people living in poverty.

Of the hundreds of shelters to have received support from the charity, three are in the Brighton and Hove area.

He has previously raised money for the charity by auctioning off his work and provides a platform for art that has been donated to the charity.

Mr King has pledged to donate £200 from every sale of his own original art to KidsOut – and he said he would encourage all exhibiting artists to donate as well.

He added: “Even a £20 donation will buy a child in a shelter a new pair of shoes that just might save them from being bullied at school for being the ‘scruffy kid’.”