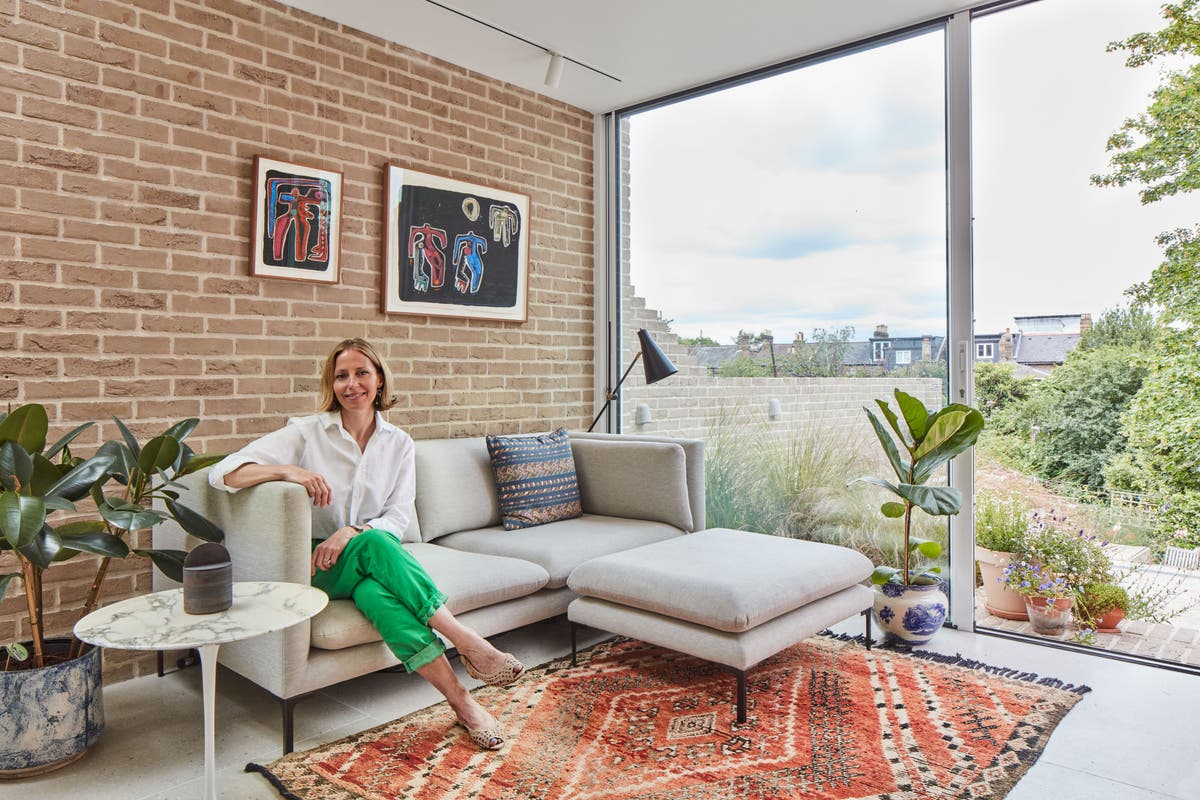 Barbican-inspired extension helped turn my home into an art gallery

needing a new extension to her modest Victorian terrace that would double as a contemporary art gallery and a high-traffic kitchen-dining-living room for her family of four, Katherine Oliver called on the firm of local Delve architecture to bring his Mediterranean/brutalist vision to life.

After working with emerging and established artists at the Royal Academy for 15 years, first on the RA Summer Exhibition and then as Curator of its Art Sales Programme, Oliver decided to make solo rider in 2019.

She created her own nomadic art gallery, Olive Tree Projectsspecializing in works on paper and ceramics, with a focus on artists from South East London.

“I’ve had pop-up shows in lots of different places – an architect’s house, an empty shop and gallery spaces – but they’ve all had a domestic feel. I don’t think art works so well in cold, white boxes; I prefer a warmer, more welcoming environment.

Meanwhile, Oliver and her husband felt they were outgrowing the Camberwell home they had lived in since 2007.

She was already showing the work of Oliver Projects in her living room when the couple decided to create additional space by extending into the side return and the back: “I knew from the start that it should also work as a gallery . .”

The first architect she spoke to was Ed Martin of Delve. “I like to work with local people as much as possible because there is so much talent in South East London. Ed was really committed and understood what we wanted and seemed excited about the idea,” says Oliver.

Perhaps the clue is in the firm’s name, as Martin explains: “Delve means to explore and investigate, which is what we do to create each client’s dream space.”

The couple brought a selection of inspirational images to their first encounter with Delve, including Mediterranean courtyards full of grasses and flowers and brutalist architecture, particularly of the Barbican arts center and housing estate. “My first gallery job was there and we always loved the architecture,” says Oliver.

On projects like this involving shared walls, Martin urges clients to speak to their neighbors early, as Oliver did.

“It avoids the shock of a letter from council and in this case we discovered that the neighbors were also planning to fill in their side return, so we were able to make sure they could build on our design.”

The extension provided the family with an additional 20 square meters of space, with an entire sliding glass wall opening onto the garden and the railway wildlife corridor beyond. “It’s such an unusual sight in London, I think that’s why we stayed here for so long,” says Oliver.

While others opt for huge kitchens, Oliver was adamant that this area should be relatively modest.

“I didn’t want it to dominate the room or interfere with the exhibition space.” The cabinets are by Pluck, another example of local talent, based near Brixton.

In order for the space to be successfully transformed into a gallery, the priority was generous storage, sufficient to store all the paraphernalia of family life quickly and easily.

The large bank of chestnut cupboards provided plenty of space for coats and outdoor essentials, as well as a good sized fridge freezer and pantry.

The adjoining bank of low cupboards has room for all the kids’ belongings. This storage bank also plays a secret role in hiding the slanted wall that previously marred the clean lines of the room.

“The house was diagonal, but we wanted everything to be flush and perfectly square,” says Martin with obvious satisfaction.

In addition to display shelves that can be easily adjusted, the plaster ceiling houses a concealed picture hanging system, allowing Oliver to set up any art display without visible fixtures. There is also versatile lighting to best show off each room.

Similar quiet ingenuity has been applied to the privacy issue. A large overhead light was essential to illuminate the depths of the new room, but Oliver’s husband feared he would be overlooked.

The solution was to punctuate the opening with birch ply “fins” that mask this space, much like a slatted blind would, and the void was lined with the same warm-hued ply.

“Birch plywood is hard to come by at the moment because it comes from Siberia, but oak, Douglas fir and veneers are good alternatives,” advises Martin.

“It was a bold decision to go with brick, but Ed encouraged us to use it on both walls and the terrace as well, rather than watering it down on one wall,” says Oliver. While brickwork sounds like a super-simple idea, Martin points to the need for careful planning.

“Often minimalism is the hardest thing to create, but behind the scenes there are pipes, cables and a boiler duct – it all has to be thought out in advance,” he says.

While the walls nod to the Barbican influence, the floor, with its large terrazzo tiles, nods to the Mediterranean side of the guest’s wish list. “We considered poured concrete, but it’s expensive and these tiles bring color in a subtle way that doesn’t defeat the art,” says Martin.

With the whole project costing £175,000 plus VAT and taking just over six months, the family are delighted with the feeling of light and space.

And her customers can see artwork in the more conventional living room, then be amazed as they move around the back of the house. “It opens up and looks like a real surprise,” she says.

Best of all is how quickly Space adapts between her two roles. “I just have to quickly sweep the surfaces, pick a few flowers from the garden and the gallery is good to go.”