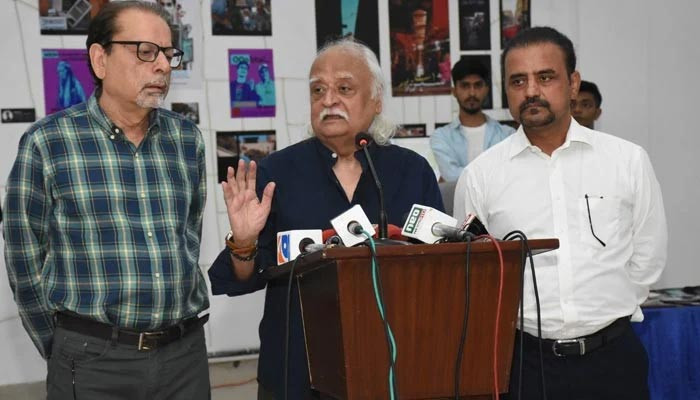 KARACHI: Veteran writer and presenter Anwar Maqsood said on Tuesday he was worried about recent flooding in Pakistan, but witnessing the student artwork eased his anxiety.

The legendary writer’s comments came during his speech at the Arts Council of Pakistan (ACP) Mini Thesis Fair 2022 which was held at the art gallery at its premises where he was accompanied by the President of the ACP, Muhammad Ahmad Shah.

“I was worried because of the flood. Today seeing the work of these students reduced my anxiety,” said Anwar Maqsood during an intervention on this occasion.

“These students will get jobs when they pass out, no one will be unemployed, moreover, the students are happy and satisfied with their studies,” said art school principal Shahid Rasam, adding that it is a joint project of the Indus Valley and the University of Iqra. named “Khoj”.

Rasam added that today is very important for students as our special guest is Anwar Maqsood.

“He had autographed a picture of me in the 80s, after which my luck shone…many stories are heard and seen after seeing the work of all of you,” Rasam said.

The works of eight communication design students were presented during the exhibition.

The third Mini Thesis Show will continue until September 7 from 10 a.m. to 6 p.m.

Later, Maqsood also visited the relief camp set up by the Arts Council.