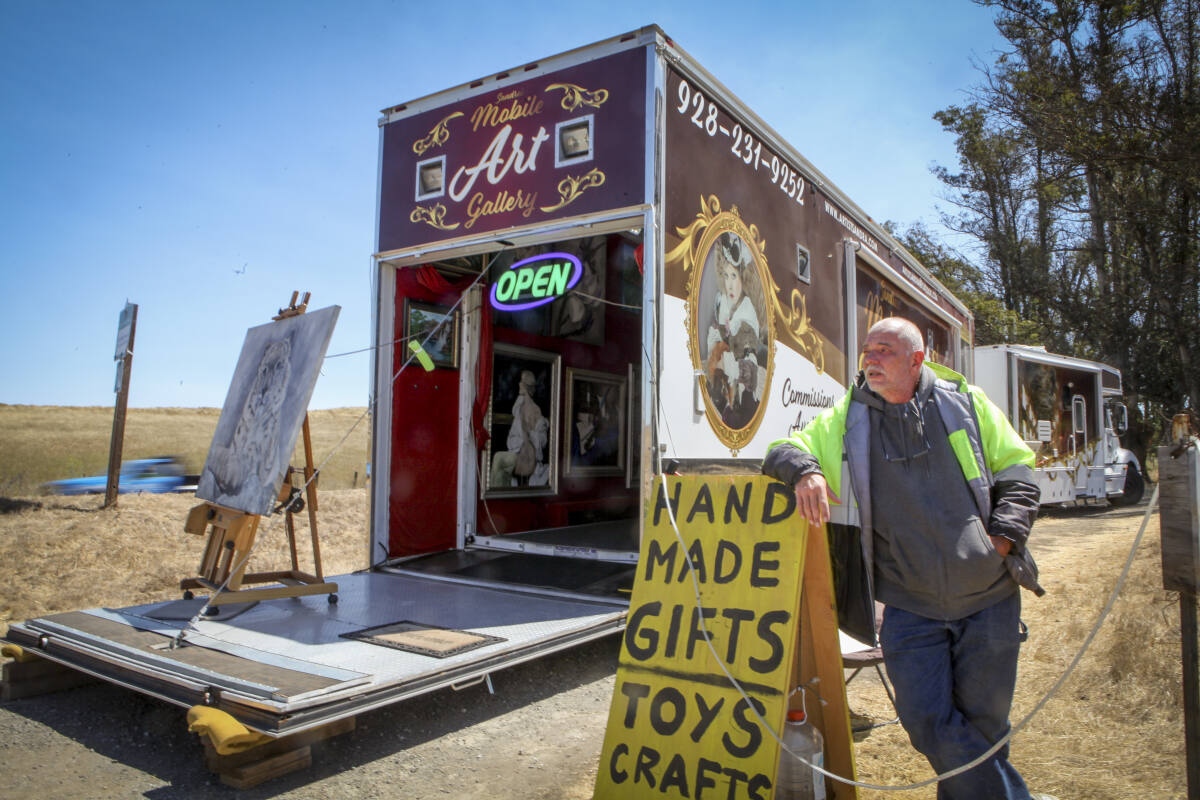 An art gallery in a big truck on Stage Gulch Road?

For a little over a year now, the eye-catching 18-wheeler has occupied a small but important stretch of land at the southeast end of Petaluma, where Adobe Road meets Stage Gulch Road. Adorned with the words “Sandra’s Mobile Art Gallery” and a large pair of portraits of richly dressed Victorian women, the 48-foot-long tractor-trailer easily grabs the attention of drivers.

According to Satula, once people spot the neon “open” sign and the bright yellow sandwich board out front that reads “Handmade Gifts, Toys, Crafts, etc.” — lots of drivers stop to see exactly what’s on display inside this truck.

“Sometimes in a day I only see one person, sometimes 10,” he said. “I think I average five or six people a day, something like that. It depends. I’m retired, so that doesn’t bother me. We don’t make a lot of money with it, but that’s okay. I do this for my wife.

Sandra Satule is the painter whose work is displayed inside the large, 16-foot-tall trailer, which Satula typically keeps open from 8 a.m. to around 10 p.m. Unless he’s running an errand or delivering a painting to a client, he can usually be found at the truck gallery, ready to show passing motorists and then tell them about his wife’s work.

“She’s an artist. She lives to paint. She can’t live without it,” he said.

The couple, both from Lithuania, lost homes in two different wildfires in 2018 and 2020, in Shasta County. The devastating losses led directly, if not immediately, to the establishment of Sandra’s Mobile Art Gallery.

Prior to the fires, Satule operated a more traditional art studio, in an actual building in Redding.

“In that first fire, she lost 60 paintings and everything,” Satula said. “We had 2 or 3 minutes to leave. We couldn’t salvage anything, so she lost all her gear, and then we bought it all back. And then after the last fire, when she lost everything again, she got really depressed and said, ‘No. I’m not going to do it anymore.

“So with the insurance money, instead of buying another house, we bought a big boat, and I bought this rig,” he explained.

The truck had been listed for sale in San Diego, Satula said.

“We went there. We went to San Diego, but I didn’t tell him about the truck,” he explained. “When we got there, I said, ‘Wait here in the car” and when I came back, I was driving this rig. She said, ‘What are you doing?’ I said, “This is going to be your new art gallery.”

Apparently, the idea of ​​an art gallery inside a truck was enough to resurrect Satule’s artistic inspiration.

“She started to come back from her depression,” Satula said. And now she paints all the time. She works 10 hours a day. But she works with oil paints, and it takes a long time to dry, and she can only paint one color at a time, so she works on a whole bunch of paints at once, one after the other. others. And if the oil is not yet dry on one of them, it makes jewelry or toys. She is always busy. That’s what makes her happy.”

Satule stays on the boat, a three-story yacht housed in Rio Vista, Solano County, and visits with new paint every 10 days or so, Satula said. When she visits, she paints there in the truck, in a special studio space in the large cabin. When asked why he chose this particular spot off Stage Gulch Road – which he rents from the owner – to park the rig and establish his roadside art gallery, Satula’s answer is as simple as practical.

“It’s a big platform,” he said. “There aren’t many places to stop and park.”

The unconventional arrangement suits him, he says. It keeps him busy and he enjoys meeting people, although it can be difficult to maintain such an operation inside a truck which, despite its size, still has limitations.

A black art gallery celebrates the founding of Overtown in Miami