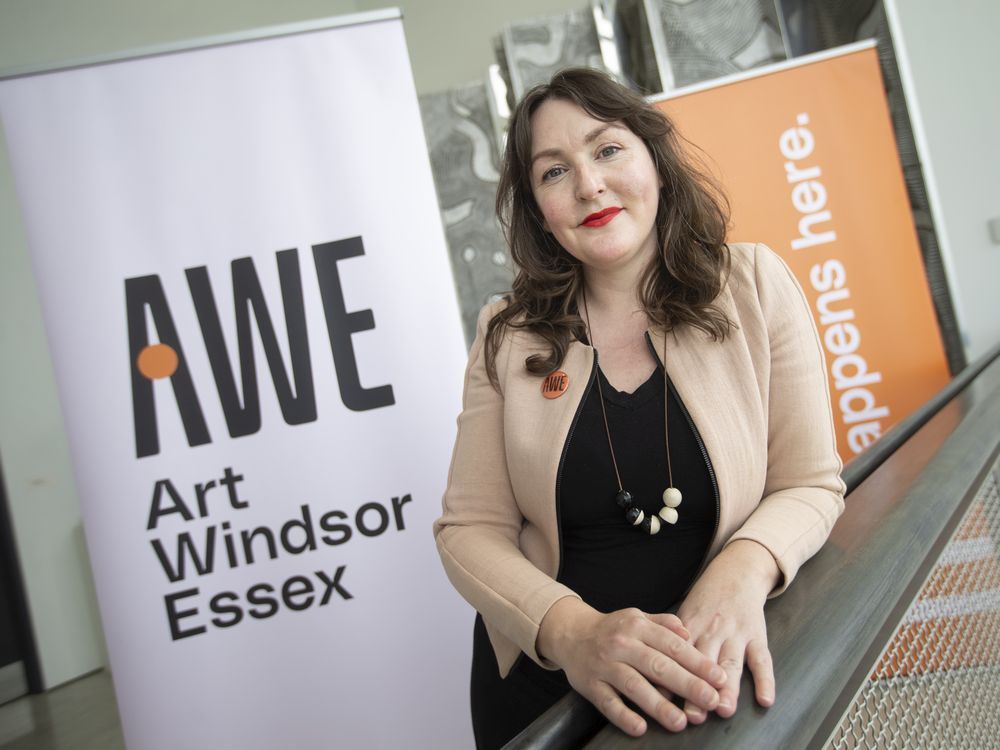 The Windsor Art Gallery – or so it was called until Thursday night – is coloring outside the lines.

The organization reinvents itself; committing to being more than just a place where art hangs on the wall and changing the name it has had for over five decades. It is now called Art Windsor Essex (AWE).

The plan is to expand the boundaries of what a gallery is – to bring art to the streets, online, and to put it in people’s hands. The organization’s new slogan is “Change Happens Here”.

“AWE won’t just be our name,” said executive director Jennifer Matotek. “It will be our promise to the public, to inspire, to provoke, to surprise, to think, to laugh and ultimately to transform and change.”

The changes emerged from a strategic planning process that began in 2020 and included consultation with over 200 community members.

The institution, then called Willistead Gallery, opened in 1943 at Willistead Manor. It became the Art Gallery of Windsor (AGW) in 1969. The AGW has had several homes since then, but the name has always stuck.

That changed Thursday night with an announcement at the organization’s annual general meeting.

But Matotek said they weren’t just replacing a sign on the building. While the focus on Indigenous, contemporary and historic Canadian art remains, the methods of fulfilling this mandate are evolving.

She said AWE will soon launch a project in the county, but details are still under wraps.

“We’re going to Essex, as our name suggests,” Matotek said ahead of the annual meeting. “But also during COVID, we had our doors closed for so long, we had to come up with really creative ways to bring the art to the community. So we really did that, meeting people where they are. It even means digitally.

Together with a consultant and government funding, AWE will develop its digital strategies over the next few years. These strategies aren’t all set in stone yet, but Matotek said they could include a digital media studio or immersive, digital exhibits.

“We will soon be embarking on a new digital strategy that really embraces the idea of ​​what it means to be an art gallery for the 21st century,” she said. “We hear, do and understand that this is more than just a building with exhibition spaces.”

Inside the current building, the focus will be more on more practical and educational programs. The education studio, previously off-limits except for events such as school visits, will be open to the general public.

“We really want people to think about history and culture and society, and how art connects to all of those things,” Matotek said. “We want to make sure everyone who walks into the building has the opportunity to walk into our studio and engage in something that is hands-on creativity.”

The gallery has also received funding from the Community Foundation for an emerging artist-in-residence program.

“Often when you walk into the gallery, there will be an artist who is actually working in the gallery that you can interact with,” Matotek said.

Other plans include transforming the gallery into a “creative hub” that attracts other types of “creators” in addition to visual artists.

“If anything with COVID, we’ve learned that our mission is more than just being a building that shows art with a collection,” Matotek said. “We learned the power of art and creativity to change people in positive ways, to improve their mental health and help them grow as people.”

Sign up to receive daily news from The Windsor Star, a division of Postmedia Network Inc.

Thank you for your registration!

A welcome email is on its way. If you don’t see it, please check your spam folder.

The next issue of Windsor Star Headline News will soon be in your inbox.

We encountered a problem during your registration. Try Again