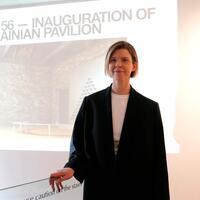 On the day Russia invaded Ukraine, Maria Lanko loaded her car with several works of art and, like thousands of other Kyiv residents, drove west.

One of these pieces, a monumental installation by Ukrainian artist Pavlo Makov, was to be exhibited in the Ukraine pavilion at the Venice Biennale.

In New York on April 6, the curator told her story at the art gallery of Ukrainian-American Jim Kempner.

Speaking to a room of reporters, Lanko explained how she had to leave behind the massive ‘Fountain of Exhaustion’ base and how she made her way for six days through Romania, Hungary and Italy. Austria before arriving on the Italian coast.

Eighty countries, including Ukraine, will have a pavilion at the 59th Biennale, which is due to start April 23 and end in November.

Lanko thinks that now more than ever it is important for Ukrainian art to be exhibited, to help push back the common idea in the West that it is a subset of Russian art.

“No one can tell the difference between these two countries and our cultures, but they are not only different, I believe they are quite the opposite,” she said.

Russia will not have a pavilion at this year’s Biennale, after the country’s organizers protested their leaders’ decision to invade their neighbour.

“There is no place for art when civilians are dying under missile fire, when Ukrainian citizens are hiding in shelters, when Russian protesters are being silenced,” said one of the curators. of the pavilion, Kirill Savchenkov, after his resignation.

Lanko, one of the curators of the Ukrainian pavilion, arrived in Venice with the “Fountain of Exhaustion” intact.

The work, reconstructed on site, is made up of 78 funnels mounted in a triangle.

The water flows easily from the upper funnel, but after being divided into the next 77 funnels, it flows very slowly into the catch basin, “symbolizing exhaustion on a personal and global level,” Lanko explained. .

Lanko’s visit to New York, home to many Ukrainian-Americans and the center of the American art world, also served to raise funds for the Ukrainian Emergency Art Fund, which she and her co-founders created to “ensure continuity and development”. of the Ukrainian cultural process during the war.

She said that with the support of nearly 200 artists and other cultural actors, she raised more than $52,000 on this trip.