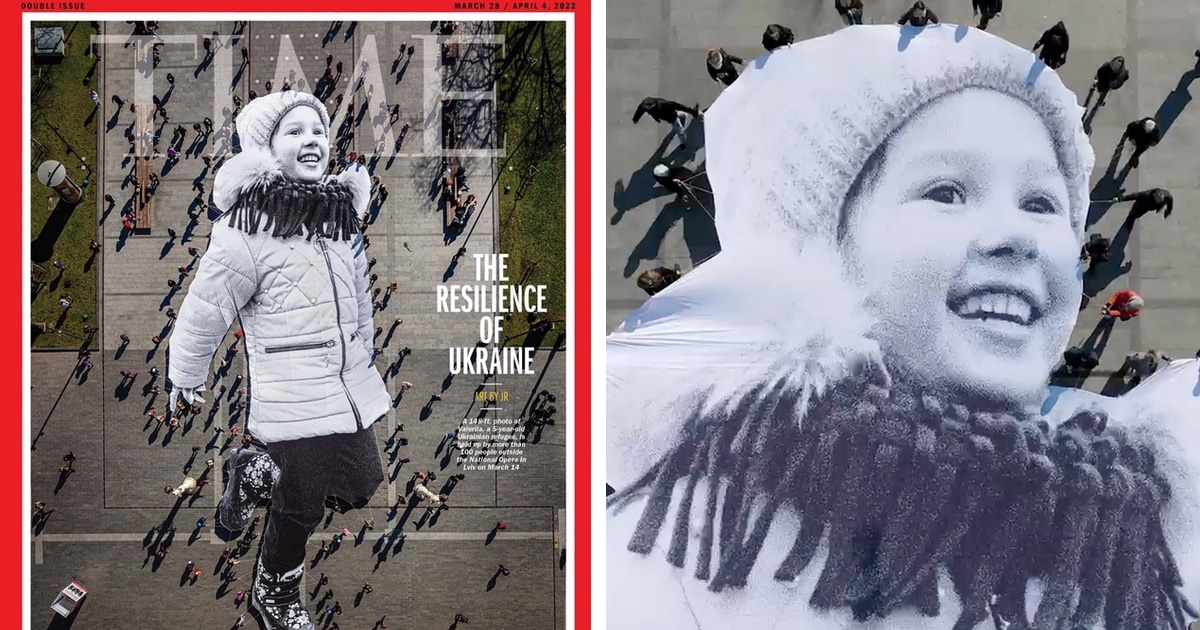 The story behind JR’s work in Ukraine

Street artist JR has added his name to the growing list of artists showing their support for Ukraine. The French artist is known for sticking large portraits of people around the world and he recently traveled to Ukraine to make a bold statement. In a moving video posted to his Instagram, the award-winning artist details his trip to Lviv, where he organized locals to unfold a huge photo of a young Ukrainian girl in the main square. The result is a striking image used as the cover of TIME which reminds the world of the toll of this war.

The 5-year-old girl in the photo is called Valeriia and her portrait was taken by local photographer Artem Iurchenko. Yurchenko was close to the border with Poland and spent time photographing Ukrainian refugees. He was in contact with JR and when he sent the photo of street artist Valeriia, JR knew he had something special. The young girl had just crossed the Polish border and her beaming smile, perhaps of relief, is a beautiful symbol of what Ukraine is fighting for.

JR then printed the photo on a tarp and then rolled up the 148-foot-long image so it could be loaded onto a truck. After driving to the border, the artist and his team walked from Poland to Ukraine and connected with a group of locals they had met on social media. From there they took the tarp and went to Lviv. Again, social media came in handy as they appealed to locals to help with the project.

Hundreds of people flocked to Lviv’s main square to help unveil Valeriia’s image. In an instant, his face was revealed and JR’s message was clear. In the video, JR is even seen talking with Valeriia and her mother on a video chat, explaining what happened. “You are going to remind everyone flying over Ukraine that there are people like you that we need to protect,” he told her.

In Tara Law’s cover for TIME, we learn more about Valeriia and her mother Taisiia. They fled Kryvyi Rih, the hometown of President Volodymyr Zelenskyy in central Ukraine, on March 9. They are now moving to Poland with Taisiia’s sister, nephew and mother. Like many families, they are separated from Valeriia’s father and brother who had to stay in Ukraine. Their story is just one of many similar stories in a war that Ukrainian officials say has already killed more than 120 children.

If you would like to support Ukraine and are a fan of JR’s art, he is currently hosting an NFT auction of this installation until March 28th. According to the website, “All proceeds from this project will go towards creating a logistics chain to support refugees at different Ukrainian border crossings.

“This little girl is the future and in this war she reminds us of what Ukrainians are fighting for,” writes JR.

First of its kind for Portage – digital art exhibition