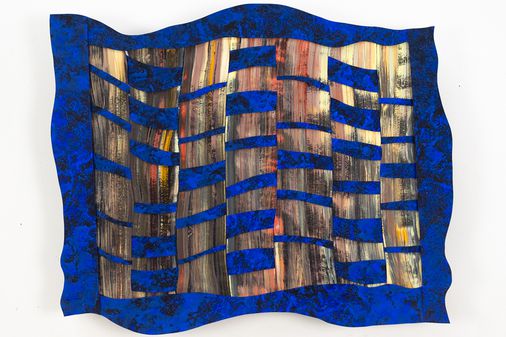 Many of the seven artists in “shape_shifting_support_systems” at Praise Shadows Art Gallery are trained painters who have turned to weaving, their hands directly on the materials, without the aid of a brush.

The paintings are played on supports, often canvases on stretchers. Weaving, co-curators Leah Triplett Harrington and Mallory Ruymann write in their curatorial statement, “is its own support system.” The strength of nested and connected parts holds a part together.

It is a means of healing that, curators suggest in a catalog essay, helps artists circumvent the expectations of the art world and surrender to the creative process; instead, they “rely on embodied knowledge to let their works of art” come to life.

These weaves still have thrilling resonances with painting. They hang on the wall, brilliantly colored and formally inventive; their grids invoke Modernism. Emily Auchincloss’ work recalls the lush geometries of the weaver Anni Albers and the painter Piet Mondrian”Broadway Boogie Woogie.”

Courtney Stock weaves paintings on paper. The undulating “euphotic zone” features a chain of coppery vertical streaks and a deep blue black weft – sunlight penetrating the water, echoing the Title. The piece, mounted to stand out inches from the wall, feels detached yet welcoming, both a thought and an embrace.

Embodied practices often lead to performance. Filipino artist Bhen Alan will be at the gallery on Saturday, August 13 at 2 p.m. to play “Pagbaoui | Retrieve», a dance with a woven work, called banig.

Alan’s banígs consider identity and code-switching in a discriminatory society. These are show-stoppers. In “Three Hundred Thirty Three”, he weaves materials with personal and cultural resonance such as bamboo leaves, coconut leaves and a bag of rice. It’s a party on the wall, a chorus of conjured ancestors in the material realm.

Natiana Alexandra Fonseca pays tribute to their oppressed ancestors. In “Presentation by Manuel Carreira Dos Santos Fonsecaa flimsy white weave hangs above a stained blood red. The title lists the family members of the artist’s mother in Angola who endured a war of independence followed by a civil war in the second half of the 20th century. There is no printed figure on Fonseca’s work, but it is reminiscent of the Shroud of Turinsaid to be wrapped around Jesus after his crucifixion.

That’s what touch does in art. These weavings are works to be seen, but they are also works to hold and to hold us — if only in our imagination.

At the Praise Shadows Art Gallery, 313A Harvard St., Brookline, through August 27. www.praiseshadows.com