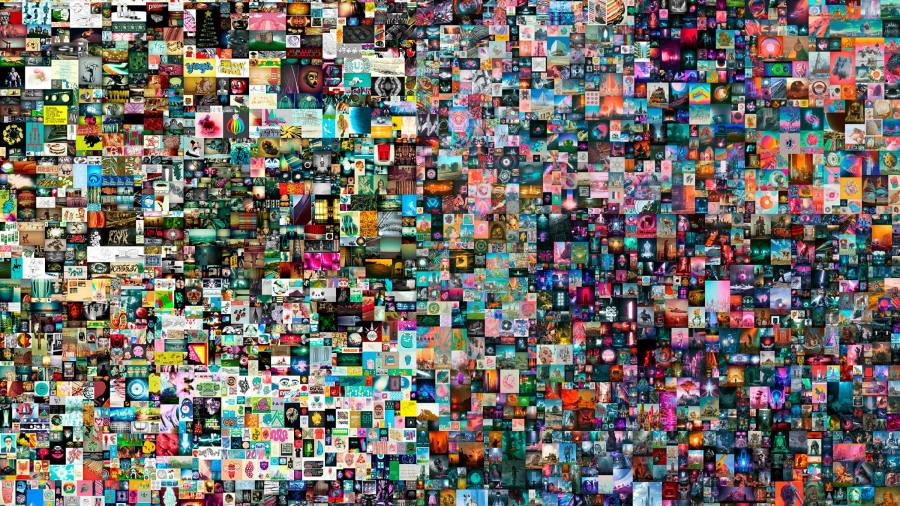 Excess wealth, in-person activity, and the three letters N, F, and T have propelled the vibrant art market through the challenges of 2021.

That the wealthy have gotten richer through the Covid-19 pandemic and accompanying stock market gains has been well documented. Now, added to the existing billionaires and millionaires, there are newcomers from booming economies in Asia, millennial entrepreneurs, and a dominant breed of crypto fintech investors, happy to ride the highs and lows. of this volatile arena.

The impact on the art market is immediate. While 2020 was all about moving physical activity online, 2021 has proven that such efforts increase the appetite for art and produce buyers eager to continue spending once some in-person activity returns. At November’s hybrid auctions in New York, more than $2 billion in transactions were completed in just one week, topped by $676 million from just 35 lots by divorced couple Linda and Harry Macklowe.

Like it or not, however, history in the 2021 art market was sealed in March when Christie’s offered a digital work by previously little-known graphic designer Mike Winkelmann, who goes by the name Beeple. The work was a compilation of 5,000 fantastic digital images that had been shared online, including on Instagram under @beeple_crap. “Everydays: The First 5000 Days” was backed by a blockchain-secured non-fungible token to confer unique ownership and had no price estimate – basically because no one had any idea of ​​its value. The staggering verdict was $69.3 million, paid by crypto investor Vignesh Sundaresan, known as Metakovan, and it put Beeple in the same price league as David Hockney and Jeff Koons.

Suddenly, we all had to wrestle with the language of new technology – hit, drop, cut – and, perhaps more difficultly, try to understand alternative systems of value and ownership. Important issues such as copyright, tax and regulation remain in catch-up mode at the end of the year, but those of us who thought it was a fleeting phenomenon of work at home were wrong.

Auction houses have been quick to co-opt the NFT phenomenon into their sales, while galleries ranging from megawatt Rhythm for London Unit launched their own NFT platforms. By the end of that year, Sotheby’s had its own metaversewith a digital gallery in Decentraland’s virtual Voltaire Art District.

It sounds disconcerting, but such moves proved their worth at the November auction of the Macklowe Collection of physical art, mostly from the 20th century. Here, the founder of cryptocurrency platform Tron, Justin Sun, who first bought NFT works for $1,500 by digital artist Pak at Sotheby’s in April, quickly upped his game. He bought Alberto Giacometti’s “Le Nez” (1965) for $78.4 million, the fifth-highest price paid at auction this year.

Overall, public auction figures for the three major houses, Christie’s, Sotheby’s and Phillips, have more than reversed their 2020 declines. Combined, they generated more than $12 billion in the year to as of December 8, up 76% from 2020 and 20% above the equivalent 2019 total, according to analytics firm Pi-eX. While New York continued to take the bulk of record sales, Hong Kong has become a shopping hub: Phillips says its sales here have nearly doubled from 2020, having already gained 25% in that year.

Elsewhere, art fairs began to slowly return, with restricted releases for events such as Art Basel in Hong Kong and Frieze in New York in the first half. These were followed by an intense season of events ranging from the postponed Art Basel in September to the release of the same fair in Miami in December. In London and Paris too, physical trade shows have exploded with the renewed energy of professional networking and boosted sales across a range of channels, now better suited to remote access.

Frieze gave an injection of confidence by announcing the launch of a fair next year in Seoul, a city with an influx of galleries this year. But the specter of the Covid-19 pandemic was never far away. For its Swiss fair, Art Basel set up a $1.6 million relief fund for exhibitors; at the time of the Miami fair, the impending Omicron variant was a reminder of the fragility of such international events during the ongoing pandemic.

Gallery closures throughout the year indicate a strained industry. Mainstays such as Gavin Brown and Metro Pictures in New York left the scene and, in Cologne, Delmes & Zander, champion of underrepresented artists, closed its doors after more than 30 years. “Times have changed”, simply note the founders of the gallery in their press release.

Artists have begun to take matters into their own hands, not just through social media and NFTs that can bring them directly to buyers, but through alternative intermediaries, including a growing art agency scene. At the same time, auction houses are encroaching on all areas of the art trade: galleries seem cramped.

They have, however, benefited from lower available rents as traditional retail moves more fully online. New gallery spaces ranging from short-term pop-ups to permanent installations have followed the money and galvanized commerce in resorts such as the Hamptons, Palm Beach and Aspen. Events that focus on the gallery space, including this year’s inaugural London Gallery Weekend, find their place in a more decentralized world.

What about art? The 20th century is still the biggest earner and this year’s auction record came from the reliable Pablo Picasso, whose 1932 painting of his lover Marie-Thérèse Walter sold for $103.4 million at Christie’s in May. Hot on his heels is Jean-Michel Basquiat, an artist whose place in the pantheon of art history is now cemented and whose worldwide popularity lends weight to the broader reassessment of street culture. and artists of color. Despite the appearance of a more diversified presentation of art in exhibitions and fairs, there is still a lot of work to be done to correct the imbalances.

There was speculation about the works of a handful of contemporary artists as auction houses shifted their offerings towards the newest of new art. The usually beleaguered Old Masters market still managed to produce the third highest auction price of the year in January when a c1480 portrait by Sandro Botticelli sold at Sotheby’s for $92.2 million . And, in December, the Dutch government confirmed that it was ready to buy Rembrandt’s ‘The Standard Bearer’ (1636) for the nation, for 165 million euros.

Such enthusiasm for traditional paintings may not last until 2022, but has created a refreshing contrast of the old guard with the metaverse. If the NFT craze at the Miami Fair in December is anything to go by, however, next year we might not hear much else.