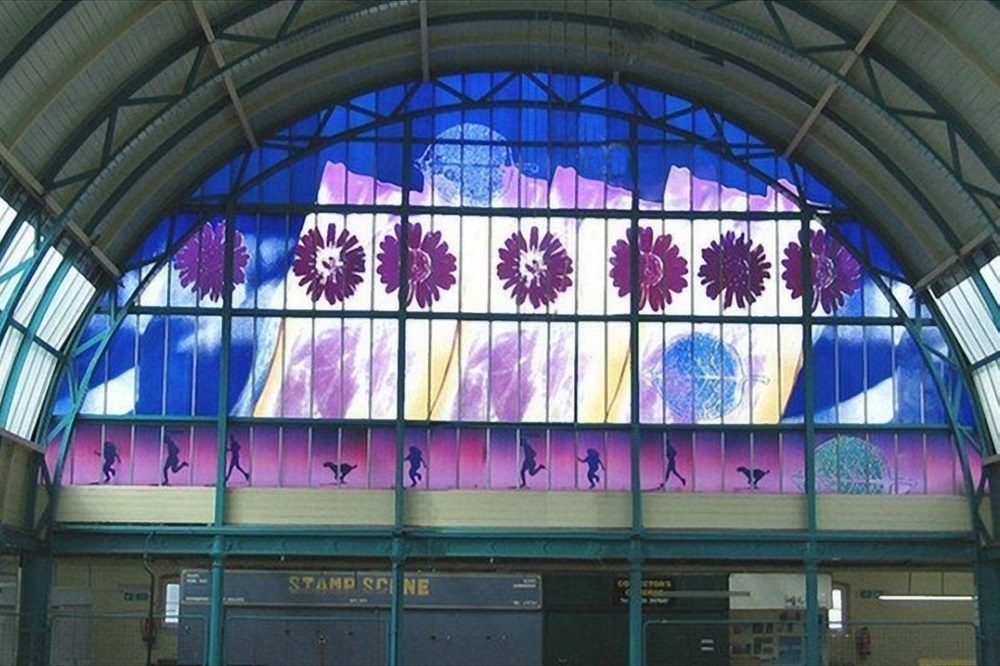 The decision to conceal a stained glass artwork in Newport Market has been called an “insult” by the artist behind it.

At a Newport City Council Planning Committee meeting today, councilors approved the request to cover existing art with a cream banner which will be used to project advertisements and cinematography.

Catrin Jones, the Swansea-based artist who was commissioned by the council in 2002, said: “Identity is important in a city like Newport, and it’s a gem that Newport has chosen to hide.

“We have to have our particular identities, and one of the functions of public art is to enhance a building, people can look up and ask questions, art creates discussion.”

According to Catrin, the artwork is the largest expanse of contemporary stained glass in Wales at 120 square meters – and it aims to represent the “dynamism” of the market.

Catrin said: “The bright and colorful design reflects Newport’s growing confidence and prosperity, and features a wide array of flowers, leaves and family.”

Concerns were also raised by the Council’s Historic Buildings and Conservation Officer. They said the banner would detract from the character and aesthetics of the building, as the lighting would be drastically reduced.

At the planning meeting held on Wednesday, April 6, two councilors, Yvonne Forsey and Jason Jordan, voted to deny the request.

Councilor Forsey of Rogerstone said the popular artwork should be on display for people to see.

Cllr Jordan, who represents Bettws, agreed and added that the art should be shown.

The banner had already been repaired by developers Loft-Co before the market’s initial reopening in March 2022 – it now houses an array of food stalls and shops.

Cllr Ferris, who represents Allt-yr-yn, said the banner would better suit the design of the new market.

Planning committee chairman Cllr John Richards said: ‘The public has told us they want these things protected and kept in place.

“I don’t want a repeat of the mural situation.”

In 2013 the council faced a fierce backlash when the Chartist mural in John Frost Square, which had been a historic symbol since 1978, was demolished to make way for the Friars Walk shopping centre.

Hundreds of people gathered as workers began demolishing the 35-metre mosaic of 200,000 pieces of tile and glass created by artist Kenneth Budd.

The report prepared by council planning officers says the art is still ‘evident even behind the banners’ – although much of it is concealed.

Claimant Loft-Co said in the plans that the banner is in the interests of “safeguarding the special character of the listed building”.

The artist, Catrin Jones, said: ‘The fact that they have renovated the market is great, but not so great.

Catrin suggested placing screens for advertising purposes instead of using the banner.

At the meeting, plans were also approved to extend the market to the mezzanine which is currently used for offices.

This floor will now host a mix of shops, takeaways and leisure facilities.