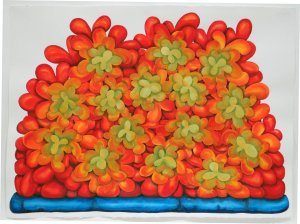 SARATOGA SPRINGS — The Schick Art Gallery at Skidmore College presents “Humor Me,” an exhibition of works by Betsy Brandt, Kiah Celeste, Amy Cutler, David Greenberger and Nina Katchadourian, from March 24 through April 25. An opening reception will be held from 5:30 p.m. to 7 p.m. on Thursday, March 24.

Works on display include drawings, paintings, prints, photographs, sculptures and videos. The humor in question can be subtle, overt and even contradictory, arousing lingering curiosity in the viewer.

David Greenberger is an artist and writer best known for his Duplex Planet series of zines, comics and spoken word. Her 9 x 11 inch colored pencil drawings are often text-based and explore personal philosophies, popular culture, and accidental poetics. Each drawing follows specific compositional boundaries; Over the past decade, he’s amassed thousands of designs grouped into idiosyncratic categories such as “Spaghetti”, “Memorial haircut designs at the same price as my age”, and “Popular band names among boys aged twelve”. years”. Along with the comics, Greenberger’s work has been adapted into short films and one-act plays, and his essays and performances have been broadcast on national public radio.

Betsy Brandt’s paintings flood the eye with color and tease with rounded shapes and puckish gestures. His art has been exhibited in museums and galleries since 1987; one of his well-known early pieces is “Adirondackland”, a 1998 collaborative installation with Susie Brandt shown at Art in General in New York.

Kiah Celeste focuses on working in three dimensions, using recycled industrial objects and transforming them into abstract forms. She has exhibited her work at the KMAC Museum in Louisville, Kentucky; Josephine Sculpture Park in Frankfort, Kentucky; and Swivel Gallery in Brooklyn, New York, among others. Celeste currently lives and works in Louisville, Kentucky.

Amy Cutler is known for her enigmatic illustrations of women performing strange and enigmatic tasks: carrying goats on their backs in “Above the Fjord” or sewing stripes on tigers in “Tiger Mending.” Cutler’s works have been exhibited at the Madison Museum of Contemporary Art in Madison, Wisconsin, and the Institute of Contemporary Art in Philadelphia, among other national and international venues, and are held in numerous public and private collections.

An interdisciplinary artist whose work includes video, performance, sound, sculpture, photography and public projects, Nina Katchadourian’s choice of materials and mediums are often the by-product of chance or self-imposed rules. His work has been exhibited at the Brooklyn Museum, the Metropolitan Museum of Art, and MoMA PS1, among other national and international venues.

Schick Gallery events are free and open to the public. Visit www.skidmore.edu/schick for up-to-date information on related events.

Will digital art change the way we create, consume and commission artwork?