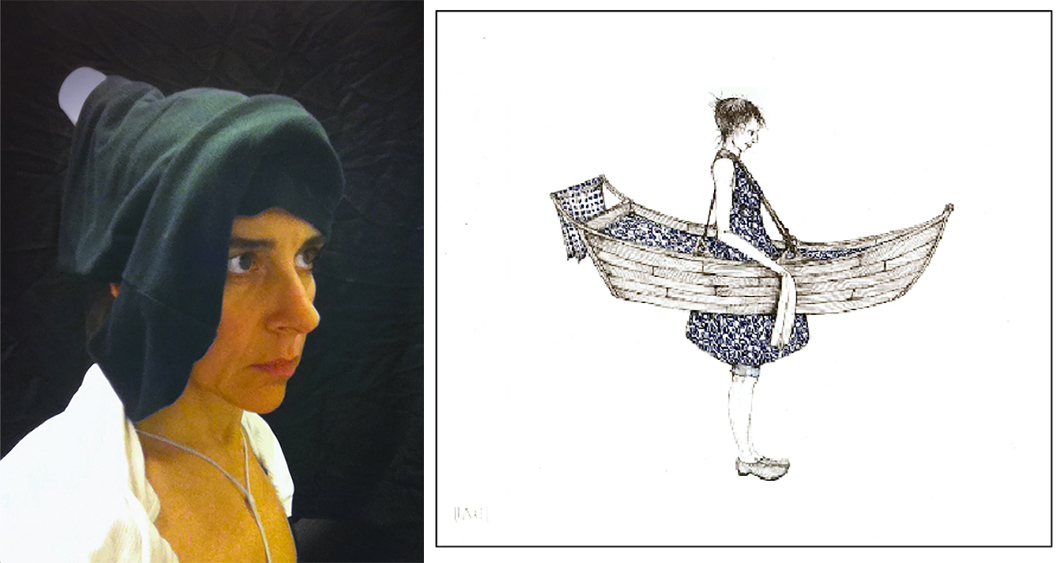 “Humor Me,” an exhibit at the Schick Art Gallery at Skidmore College, is a welcome respite from the distressing news cycle of recent years.

The latter has one of the most striking senses of humor on the show, which shines through in her series “Flemish Toilet Self-Portraits”, which she photographed in airplane toilets.

“While in the lavatory on a domestic flight in January 2011, I spontaneously put a cloth toilet seat cover over my head and took a picture of myself with my cellphone,” wrote Katchadourian in an essay.

The image reminded her of Flemish portraits and she created other headdresses to emulate this style. Each is presented in shimmering frames along a bright red wall that stands out from the rest of the show. The poses are instantly recognizable and it’s only on closer inspection that viewers realize the character is wearing paper or scraps of fabric (or in one case plastic).

The series is quirky, self-aware, and just plain fun.

Luminous paintings filled with curvy, curly shapes are on display nearby. Some refer to flowers, berries and tiny tendrils while others are more whimsical. Linking each of Brandt’s paintings together is the use of color; it is both joyful and tumultuous, a rejection of all that is dull.

The humor of these works does not necessarily make people laugh, but it is there all the same.
Curator Trish Lyell, who is a teaching professor at Skidmore and associate director of the Schick Art Gallery, has always been intrigued by humor, which can be quite difficult to define.

“When people think of humor they sometimes think of laughter or jokes, which is certainly there but serious humor, if you will, is a very elusive thing. I find artists with humor often approach the serious business of their ideas, whatever they are, in a way that’s disarming, that doesn’t take itself too seriously, necessarily,” Lyell said.

Greenburger, known for the Duplex Planet series, certainly falls into the latter category. The exhibition features a series of his drawings, many of which are text-based and include amusing personal reflections.

Viewers can especially relate to the one that reads “The amount bitten versus the amount chewed.” It is written under a composition of a large mass of swirls, representing the “bitten quantity”, which collides with a series of much smaller lines, reflecting the “chewed quantity”.

Another design features cutlery with phrases like “ear infection”, “pox” and “scraped knee” written on the handles. The accompanying text reads: ‘Some childhood issues’. On a pink and white background, the phrase “I will not laugh at nature on a walk” is repeated in another work, reminiscent of a school punishment.

There is a subtle humor to Cutler’s lithographs, which feature bold and endearing depictions of women, although a few of his works take on a darker tone.

“Millie,” a standout piece in the exhibit, features a woman with a boat strapped to her shoulders, with oars for her arms. The blue leaf pattern seen on her dress extends to line the inside of the boat, further connecting the woman and the boat. There is nothing else to the composition and the lack of context is disconcerting, but it allows the viewer to imagine perhaps their own distant tales.

Nearby, in a playful artwork by Cutler, a pile of destroyed decadent cakes rests on the base of a birch tree, with an upside-down tree house perched in the branches above. Hints of characters hidden behind the surrounding trees, each with a cake in their hands, are seen throughout the forest, ready to add their cakes to the pile.

Dotting the floor of the exhibition are three-dimensional abstract works by Celeste. Each is a combination of recycled objects and rather than using a binder to hold them together, their stability relies entirely on the interdependence of the objects.
This makes precarious works like ‘Gall Blass’ (perhaps a counterpart to ‘Glass Ball’) all the more impressive. A series of croquet balls are balanced on glass and granite planes, seemingly defying gravity.

“Humor Me” is a curiously uplifting show and will run until April 25. The Schick Art Gallery is located on the 2nd floor of the Saisselin Art Building. Hours of operation are 10 a.m. to 6 p.m. Monday through Thursday, 10 a.m. to 4 p.m. Friday, and noon to 4 p.m. weekends. For more information, visit skidmore.edu/schick.

More from The Daily Gazette: