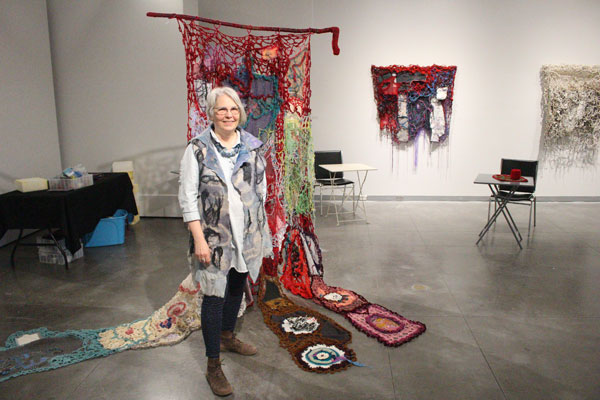 One of Mann Art Gallery’s new exhibitions offers the opportunity to collaborate with artist Elizabeth Babyn.

“Her Industry, Reclaimed” explores a variety of textile processes that women have historically advanced, such as embroidery, mending, sewing, crocheting and more recently needle felting, through the creation of tapestries made from recycled textiles.

Babyn said she originally worked in drawing and painting, but her work began to change when she moved to Saskatchewan.

“As my work changed, I decided to do my MFA at the U of S and explored installation,” she explained. “I was using a lot of textile approaches at that time anyway,”

Babyn’s project is a tribute to her late mother, Rollande, as well as to the generations of mothers and other women who worked and continue to work in the textile industry in domestic, industrial and creative spaces.

Babyn said her work really started to evolve when her mother passed away while she was finishing her MFA and she started thinking about her mother’s contributions.

“I come from a family of seven, I grew up on a farm and she sewed every stitch we wore,” Babyn recalled. “Without her, we would have suffered a lot more. She did everything from canning like so many mums of that time, so I started thinking about it. Then I thought she had also done a lot of repairs. She used to take things apart and make new ones. That was kind of the seed that got me interested.

Babyn said women throughout the ages have contributed a lot to textiles, but have not received their due. She said industrialization made it even more unlikely that women would receive credit for their work, but that’s starting to change with more and more people recognizing the medium as an art form with creations like wall hangings.

Babyn began her own artistic endeavors using salvaged materials, just as her mother would have done, but in a very different way. She started with projects like tapestries and named one after Rollande.

“All the wall hangings are named after my ancestors, but they actually represent women and men through the ages who have done this kind of work,” Babyn said. “But usually it’s mostly women.”

Her first hanging piece is “Eve”, which became a collaborative crochet piece. It all started with a small room at the Snelgrove Gallery at the University of Saskatchewan, and started growing after she invited the community to add to it.

“I loved that people come up and say they’ve never crocheted before,” she said.

“There were people who were familiar with textiles and others who weren’t and we kind of worked together.”

Babyn pointed to a part of ‘Eve’ where a young woman who had never crocheted before learned the basics and eventually created much of the center piece. At the time, the person wasn’t sure it would work.

“It’s about evolving,” Babyn explained. “I said, ‘Would you like to take a ball of yarn and crochet at home?’ So when she came up with that, I thought it was kind of lovely. It’s looser and it’s just a free form.

Babyn will be on site from April 19 to 21 (from 10 a.m. to 5 p.m. each day) to lead a collaborative workshop. Visitors are invited to join her by contributing to a large hanging textile piece in progress (started in 2019). Whether you have 5 minutes or 5 hours, you are encouraged to participate and learn something new.

“It’s going to grow and I hope people will even come back later to see how well it’s evolved.” Baby said.

She explained that the needle felting and wet felting all became part of the piece.

“It’s a good textile approach to getting people going with textiles and stuff and it’s so forgiving,” she explained.

There’s stitching and a bunch of mediums used in ‘Eve’ and people can add whatever they want.

“We just add these pieces and some people will come and say, ‘I just wanna sew, I wanna crochet,'” she added.

Babyn said she wants to see Eve continue to grow by taking her to more communities.

The size depends on how many collaborators she gets after she starts growing in the Mann.

“That’s one of the limitations of a studio,” she says. “I love my studio, but at the same time, the limits are the space, especially when you do all of this, it starts to fill the space. I thought, ‘Now I have the opportunity to start work because I have the space here and hopefully I’ll start doing that too.’

The exhibit also includes his other self-supporting pieces similar to “Eve”, including one called “Boro”, which is a Japanese word for repair. Another piece is called ‘Dumpsy’ and depicts the goddess of land and sea.

Another large piece is named after Hera, the goddess of marriage, which has individually wet felted roses.

“Everything is recycled,” Babyn explained. “I thought first of all I got a lot of light colored stuff so I thought why not work with it and since I’m salvaging materials but also when you think of weddings they can be very opulent “,

Also, running at the Mann is the show Negar Devine-Tajgardan: The Reunion.

La Réunion addresses memories of absent spaces and vanished objects through furniture miniatures. Negar Devine-Tajgardan uses dissolvable fabric for its fragility and ability to speak of the vulnerability of life.

This project focuses on the physical spaces of memory, beginning with the artist’s own experiences of displacement and immigration.