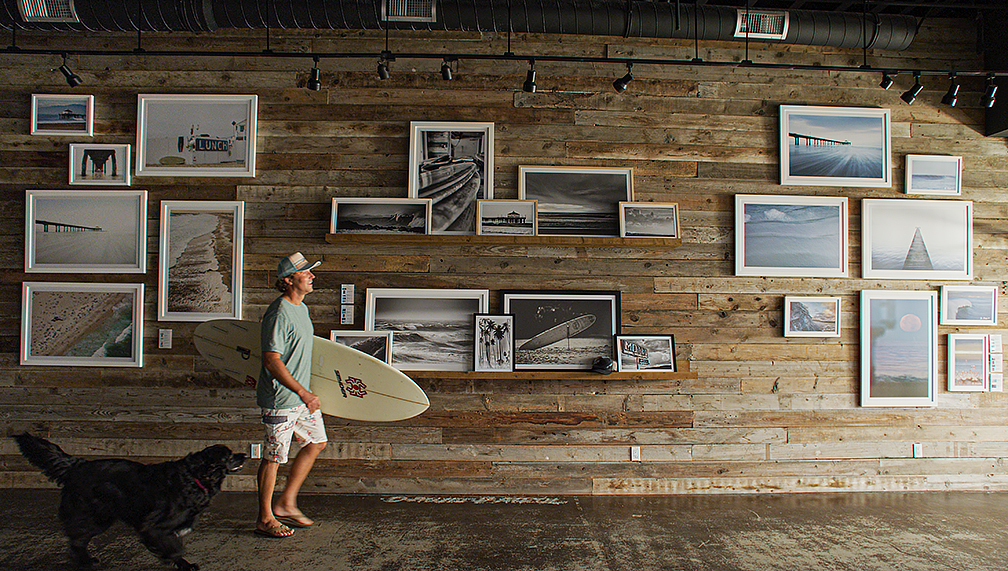 Art Gallery Best of the Beach 2022: Surfing the Mind with Bo Bridges

A mural by Bo Bridges of a surfer diving into a duck was recently unveiled by the City of Manhattan Beach on the side of a downtown parking lot. Another Bridges mural is to be installed on the side of the nearby City Hall. Around the corner on Manhattan Beach Boulevard, the new Esperanza Restaurant plays Bridges’ surf videos for two and a half hours on its 24 big-screen TVs. Other site-specific installations by Bridges are found in homes and businesses in beach towns. All of this work is an unintended consequence of the pandemic, Bridges said. In 2006, he opened a photo gallery in downtown Hermosa Beach. It was a passion project. Bridges made his living traveling the world as an extreme sports photographer. His clients included ESPN, Sony, Disney, ski resorts and surf apparel companies. He filled the Hermosa gallery with portraits he took of sports figures, including footballer David Beckham, baseball player Derek Jeter, skateboarder Shaun White and tennis player Serena Williams. Extreme sports photos, including a Surfer Magazine cover of Alex Gray in Tahiti, and big wave surfer Garrett McNamara riding the waves generated by a glacier in Alaska, came to break up the portraits. The portrait photos did not sell well. In 2013, the bridges mov